This is a walkthrough for the English translation of Pulltop If My Heart Had Wings by MoeNovel. Its original Japanese name is “Kono Oozora ni, Tsubasa o Hirogete” and was released in 2012. The English download edition is available from Mangagamer.

The walkthrough has been based on this Japanese version by Seiya-Saiga, but adjusted to match the English translation instead.

If My Heart Had Wings has 5 character routes (Kotori, Ageha, Amane, Asa, Yoru), as well as a bad end. You just need 3 save slots for this guide.

If you liked the game, you might also want to have a look at its fandisc, called “Kono Oozora ni, Tsubasa o Hirogete Flight Diary“, though it goes untranslated as of yet. 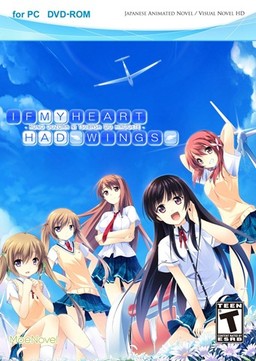 この大空に、翼をひろげて
Brand(s): Pulltop
Release date: 2012-05-25
Having lost his dream, Aoi Minase returns to his hometown of Kazegaura. On his way he encounters a wheelchaired girl named Kotori who got stuck with a flat tire. He offers to help and while he’s helping her they see a wide…
View full details