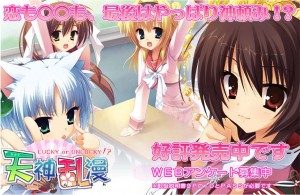 Sekai Project keeps adding new games to their portfolio of games. This time they were at Otakon and had a few announcements to share with us. First announcement on the list I’d like to bring you is Yuzusoft’s Tenshin Ranman, a game about an unlucky protagonist who suddenly received a girl in a box by express delivery.

The game is the 4th game by popular Japanese visual novel brand Yuzusoft and was released in Japan in 2009, followed by an all-ages PSP edition with Russel in 2010. Its PC edition is called “Tenshin Ranman – Lucky or Unlucky!?” while the PSP edition is called “Tenshin Ranman – Happy Go Lucky!!”. Sekai Project has adapted the latter of the two names for their English release.

Art for the game was drawn by Muririn (vndb) and Kobuichi (vndb). Both of them worked on all of Yuzusoft’s games before, including the recently released Sanoba Witch. The scenario is written by Yuzusoft writer Ritsu Amamiya (vndb) and Hare Kitagawa (vndb), who also worked on games for Pulltop Latte. The game was directed by Senji.

Haruki is a young man who spends his days filled with all kinds of misfortune. Things like his cellphone falling into the water, or his bicycle failing on him. He also lost count over how many times he had lost his wallet. To him, these kind of days are “normal”.

The one day he suddenly receives an unexpected package, a box with no sender name or address listed. And the contents of the box surprised even him, someone used to all sorts of unusual events. The box contained… a girl!?

And this very delivery marked the beginning of a turnaround for Haruki. The girl claims to be a “God”, declaring about how she’s here protect him from all the misfortune, and to bring him luck instead. Though she did cause a new problem to arise, namely that she attracted other people to his surroundings.

What will happen to him now? And what’s the girl’s goal? Did she really make all of his misfortune go away? Only the following days can tell…

Unfortunately Sekai Project has not yet revealed a release date for the localized version. 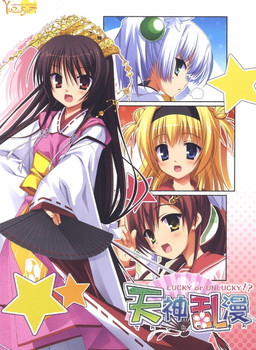 天神乱漫 LUCKY or UNLUCKY!?
Brand(s): DenpaSoft , Yuzusoft
Release date: 2009-05-29
Haruki is a young man who spends his days filled with all kinds of misfortune. Things like his cellphone falling into the water, or his bicycle failing on him. He also lost count over how many times he had lost his… Read all
View full details