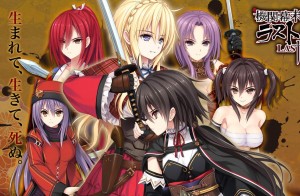 Caramel Box has opened the website for the newly announced game called “Kikan Bakumatsu Ibun Last Cavalier”, which tells a fictional story that takes place in the Bukyuu Era, near the end of the reign of the Tokugawa shogunate. Currently the pages available are the story page, various character pages, and the spec page.

The main page of the website has a nice visual of the main characters and the protagonist (black hair, in front), while the spec page confirms the staff members we heard about before. The art & character design are by Caramel Box regular artist Norita (vndb) and the scenario will be written by Aya Takaya (vndb), who’s incidentally doing the direction as well. Finally, the page tells us that the release date for the game has currently been set to December 25.

The character pages currently contain 8 characters and their introductions, whereby the protagonist is dressed up as a girl for the purpose of a disguise, so it’s definitely worth checking that out. Unfortunately there are no cast names or sample CGs yet.

In Kikan Bakumatsu Ibun Last Cavalier the world is just in the midst of the industrial revolution, which is also having its effect on Japan as they roll into the Bunkyuu Era. The long lasting Tokugawa shogunate is under pressure from their contact with the rest of the world and other schemes. This political struggle changes the focus from Edo to Kyoto, gradually attracting all kind of schemers toward it. It’s during that time that Kyoto’s security force is established, formed entirely out of women who received a special kind of baptism.

The ritual provides them with enhanced strength and reflexes on par with some of the greater beings, provided that the person is compatible enough.Then like some kind of divine prank, a compatible man suddenly appears. Soujirou Okita is a man without relatives, and works for Isa Kondou, the head of a dojo somewhere in the remote countryside.

Both Isa and Sei are like family to him, having saved him the miserable position he was in before. Then on one day the two of them are called upon by the shogunate to work in the protection force. Expecting them to leave him behind he is surprised when Isa urges him toward Kyoto as well. 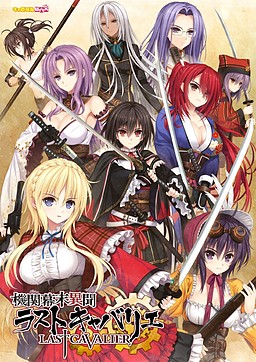 機関幕末異聞 ラストキャバリエ
Brand(s): Caramel Box
Release date: 2015-12-25
In Kikan Bakumatsu Ibun Last Cavalier the world is just in the midst of the industrial revolution, which is also having its effect on Japan as they roll into the Bunkyuu Era. The long lasting Tokugawa shogunate is under pressure from their… Read all
View full details