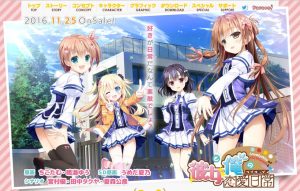 After publishing a teaser page earlier this month, Parasol has now announced the title of their latest game, “Kanojo to Ore no Lovely Day”. The website for this new game was already opened as well. At the new website we learn that the game seems to feature 4 heroines, designed by Chikotam and Yuu Narumi, who are also the two main artists for the rest of the art in the game. Chikotam you might know from her work in Alcot’s “Clover Day’s” or Parasol’s own “Hare Nochi Kitto Nanohana Biyori”. While Yuu Narumi actually worked on the very same “Clover Day’s” but also on Navel honeybell’s “Magical Dears” for example.

The story for Kanojo to Ore no Lovely Day will be written by 3 writers. The first one, Yuu Miyamura, previously worked on SkyFish and PeasSoft titles, like “Ama Ane”. The second writer is Takuya Tanaka, whom you might know from several previous Parasol titles, like their most recent title “Quintuple Splash”, but also the slightly more older “Koiimo SWEET DAYS”. Then lastly, there is Kimihiko Natsumori. A fairly new name who did work on Quintuple Splash before.

Story
Shou attends school as an arts (painting) scholarship student. Instead of painting however, he gets caught up in figurines and ends up working on molding work instead. Which results in the school revoking his rights to compete in the next art competition. It doesn’t take long for his parents to hear about this, and they send him to a dorm that has its focus on painting. Without the right tools for his new hobby he won’t be able to craft anything decent for the upcoming Hobbyfes!

Having no other choice he decides that he will work to compete in the arts competition after all. Adding his molding experience to his already vast painting talent, greatly changing his way of approaching a painting as well. Now full with love for the character being portrayed! Like about what kind of personality they have and what drives their actions. Shou determines that he wants to paint a female character for the contest but he doesn’t want it to be a simple sketch. So in order to give his painting the proper “backbone” he begins his project to observe the various girls at school.

Will he able to get chosen for the competition again? And what will the girls think of his actions?

Website & Release date
The website is available here, it has pages available for the story, the main heroines (no cast names yet), as well as a gallery with 4 sample images.

The release date has currently been set for November 25 this year. 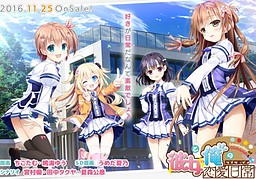 Kanojo to Ore no Lovely Day

彼女と俺の恋愛日常
Brand(s): Parasol
Release date: 2016-11-25
Shou attends school as an arts (painting) scholarship student. Instead of painting however, he gets caught up in figurines and ends up working on molding work instead. Which results in the school revoking his rights to compete in the next… Read all
View full details