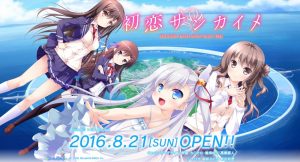 Since there was so much visual novel related news this week a little recap post might cover some of the things that you’ve missed. The post is split by by game language and category. Some games are linked to their respective game pages with more information on their story.

Trials
The trial for Frontwing’s Corona Blossom was released on Steam.

Other
BackerKit for Memory’s Dogma will be closing on August 1st.