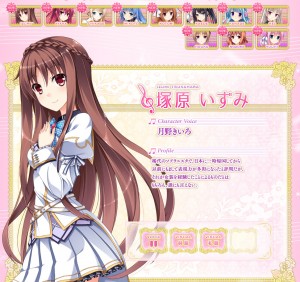 Ensemble has added voice samples to the website for their latest fandisc, Otome ga Kanaderu Koi no Aria ~Kimi ni Sasageru Encore~. Each character has received one short voice drama sample which fits their personalities. Listen to them the official site here (Loading of… Read all 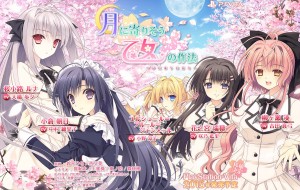 PS Vita developer dramatic create has announced to be working on a PS Vita edition of Navel’s Tsuki ni Yorisou Otome no Sahou, a game about a crossdressing protagonist living a double life. Originally released back in 2012 it has since… Read all

Ensemble has released the OP movie for the upcoming fandisc “Otome ga Kanaderu Koi no Aria ~Kimi ni Sasageru Encore~”. The OP features character introductions mixed with CG previews and plenty of other looks from each of the heroines, as… Read all 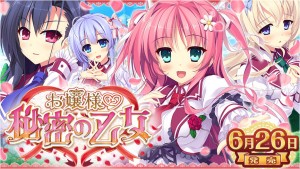 New Moonstone label Moonstone Honey has opened the website for their first game, Ojou-sama to Himitsu no Otome. The game will center around Yuuri Shinohara, a crossdressing yet kind boy who is attending an all-girls school. Since he’s the future heir of a famous… Read all

Ensemble’s crossdressing game Otome ga Kanaderu Koi no Aria will be getting a fandisc called “Kimi ni Sasageru Encore”. The new fandisc will feature after stories for each of the 5 heroines as well as an after story for bonus heroine… Read all