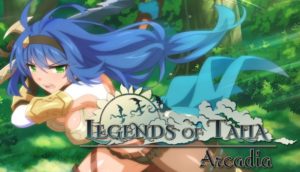 Last week there was plenty of new announcements in visual novel land that are worth sharing with you. At least, compared to some previous weeks. For example, on the English side there’s a newly announced Winged Cloud title waiting for you, while we have newly announced titles by Windmill and Windmill Oasis on the Japanese side.

Other companies with updates this week include Asa Project, feng, Lass Pixy, and a small teaser by localization company Moenovel. Enjoy!

Winged Cloud has opened the Steam page for a new kinetic novel called “Legends of Talia: Arcadia”. The story follows the story of a legendary knight called Arcadia, who has fought many battles throughout her life.

The game will also be made available in the Chinese language. Though a release date is unknown as of yet. 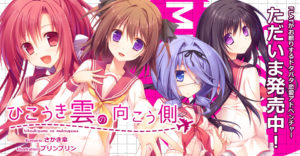 Japanese developer Flat opened a Steam page for a translated version of their 2014 game Hikoukigumo no Mukougawa, titled “Beyond Clouds”. The Steam page is currently available in Chinese only but the page does mention that there will be English Subtitles available.

The publisher is SakuraGame, for whom this seems to be their biggest release as of yet. At this point in time it’s also unsure who is responsible for the translation and which by which quality standards it’ll be released in English (if at all). 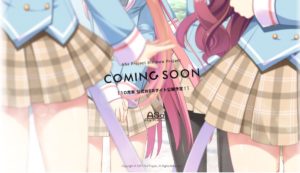 Japanese developer Asa Project published a teaser page for their 8th title. Though nothing else is known as of yet. It’s been about almost a year since the release of their previous title Suki to Suki to de Sankaku Ren’ai. Which featured 4 heroines. And judging by the preview of their latest title, this might just be another title with 4 heroines. 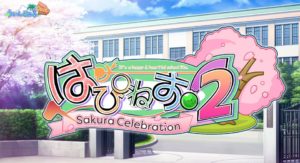 Winmill Oasis has published a small teaser for a new title called “Happiness! 2 Sakura Celebration”. It’s not a sequel to their 2005 title ” Happiness”, and it looks to be a game which will involve magical girls. Set in a school setting.

Character design will be by Koucha. And the story will be written by Motonaga Masaki, together with Happiness writers Serori and Chatora.

The exact release date is currently unknown, but the target is set to 2018. 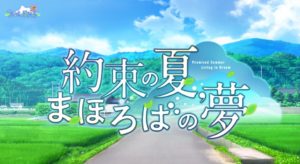 Together with the announcement of Windmill Oasis’ new title, Windmill also announced a new title. This one called Yakusoku no Natsu, Mahoroba no Yume. A title that’s also targeting a release in 2018. It’s a story set in a rural town in the middle of summer. There it’ll follow the life of 4 youths who all hold a strange power. When they meet a girl who came from the city.