This latest game by Frontwing takes place on an island located far south from the mainland. It is an island that has been blessed with rich nature and feels like a paradise, a place where one would want to stay forever. But there is a complex history surrounding the island, it began with a series of misfortunes happening to the three major families. Then it tried to cut-off all contact, marking the start of a slow decline, abandoning the Marine Station in the process.

Back in the current time frame, Island’s story begins when a young man washes up ashore, who claims to have come from the future. He disregards all traditions of the island and instead struggles to change the future. But is that really his only goal? And what about the three young girls, each of them a daughter of one of the three major families on the island?

English translation
At Anime Expo 2016, Frontwing announced that an English localization is on the way. More information is yet to follow. 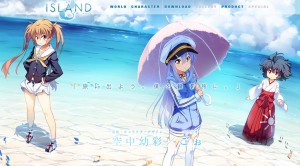