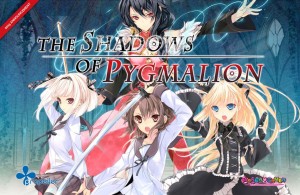 This weekend Mangagamer released their English localization of Propeller’s girls love visual novel, The Shadows of Pygmalion. A game in an ordinary high-school girl is suddenly tasked with defeating so-called puppets.

The story of The Shadows of Pygmalion has many influences from Greek mythology and is not another of typical slice of life stories. You can count on an intense battle story, with psychological elements added to the mix as well. Of course, that doesn’t mean there won’t be any romantic scenes between the girls. There will be plenty of those for you to enjoy.

Taken from the product page:
For as long as anyone knows, beings called “Puppets” have been an invisible part of our world. They operate in service of a force unknown, quietly manipulating the course of history.

Hajiro Mina is an ordinary high-school girl and the protagonist of this story. One day, she has a chance encounter with one of these Puppets, setting her on a trajectory to meet three girls—and ultimately changing her life forever.

The girls belong to an organization that specializes in the extermination of Puppets. They have been granted extraordinary powers by a doll named Ruka, and their job is to locate and eradicate the inhuman enemies lurking in the crowds.

As Mina finds herself entangled in this supernatural conflict, it becomes clearer with each passing day that there are greater forces at play.

Propeller is a Japanese visual novel developer which has been around for more than a decade. Their lineup is pretty impressive, with Tokyo Babel perhaps being their other well-known title. Since it was translated as well. And while both of these titles are all-ages, the rest of their line-up are all games targeted at an adult audience. The most of recent of these is a game called “Sougeki no Jaeger” (VNDB), released in 2014.

So far, The Shadows of Pygmalion is only available as a download edition from Mangagamer. If you also haven’t checked out Tokyo Babel yet, you can also go for the digital download bundle, which contains both games. 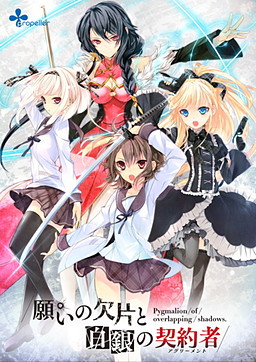 願いの欠片と白銀の契約者
Brand(s): MangaGamer , Propeller
Release date: 2013-08-23
Negai no Kakera to Hakugin no Agreement, or The Shadows of Pygmalion, is an all-ages girls’ love visual novel by Propeller. It was translated and released in English in February 2017. The story has influences from Greek legends. For as… Read all
View full details