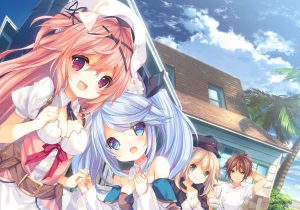 This week brought us the release of two trial editions that I would like to point out. The first of these releases is the trial for Giga’s and Team Baldrhead’s Baldr Heart. The next entry in the mecha combat action series has art by new artist Shuji Hinooka and definitely looks great if I were to be any judge. Also, the story will be written by Murasaki Hiei, the main writer for the Baldr Force and Baldr Sky games. Writing group Kikakuya will once again assist with the story.

In any case, with its roughly 1.7GB size, the newly released trial edition is a large one. Go to Baldr Heart’s official site here to download it, and be sure to take a look around the website for character profiles, sample images, and gameplay system information. 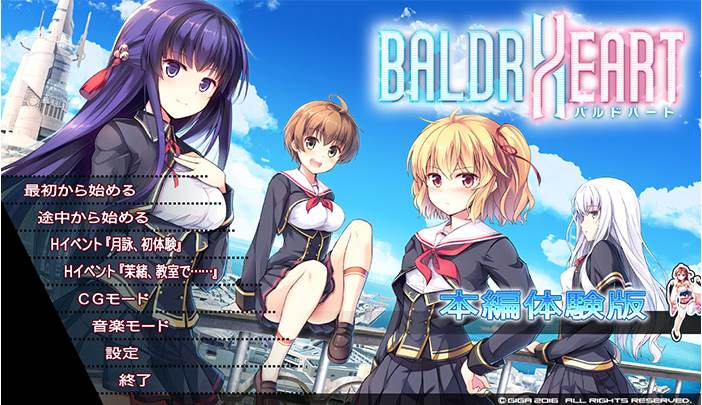 Story
The story of Baldr Heart will follow former mercenary Sou Takizawa. After losing his ability to fight as well as his job he returns to his foster father’s home on the island of Wadatsumi. For some reason his former mercenary partner Yuuri also accompanies him on his return. A girl named Tsukuyomi also comes to live with him after he happened to save her. Sou found the girl in the harbour on his return to the island, it seems that she has lost all of her memories as well as most common knowledge required to live in this world.

Because of lack of decent jobs on the island, Sou accepts a job from a mysterious person. The job involves transferring into the only school on the island, Kouka Academy. In there, he has to investigate the student’s involvements in the recent occurrences of terrorism on the island. It’s from there that this story will start to involve, as student council president Mao and a mysterious “fairy” girl make their appearance. She’s the reason as to why he lost his ability to fight in the first place…

The second trial that I want to mention is the one for new brand calme’s game “Karakara”. In collaboration with Sekai Project this game will be released in both Japanese and English at the same time. The trial was released slightly earlier in the week but if you haven’t heard about it yet, you can head over to the game’s Steam page here to download it. The main game’s release will follow in approximately 8 days, with an 18+ patch available from Denpasoft.

Story (Taken from the official website)
“Let us live on this land so arid.”

The “Age of Dusk.” It is a time of senescence for the human species, during which hybrids known as the “Others”—those who are human, yet not—exist in great numbers. On the windswept barrens of a land without moisture, a small gathering of people make their living in a world they no longer know. Down a stretch of highway and far from the heart of the town are two such people who run a small diner. To them, the circumstances that reshaped their world is of far less concern than the number of lunch boxes they can load into their delivery vehicle. After all, leaving customers hungry is not good for business, and business keeps them fed. Day after day, they occupy themselves with the endless work of their store. However, the comfortable monotony of their daily lives is turned on its head when they discover a large suitcase by the roadside on their way home from deliveries. Lying on the suitcase, unmoving, is a young girl with pink hair…

Though parched, they keep each other company, and while hollow, they fill each other’s voids. So shall they live on this land so arid. 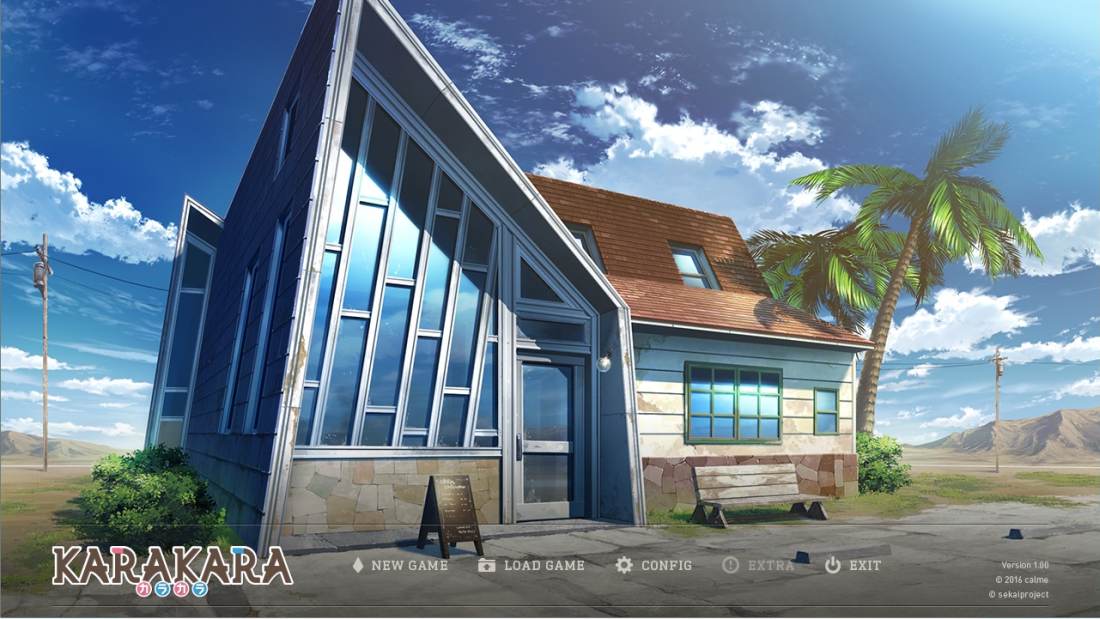 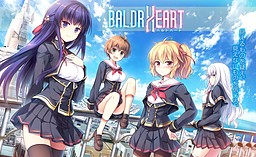 Brand(s): Giga
Release date: 2016-08-26
Baldr Heart will be another entry in the Mecha combat action game Baldr series. Its story will follow former mercenary Sou Takizawa. After losing his ability to fight as well as his job he returns to his foster father’s home… Read all
View full details 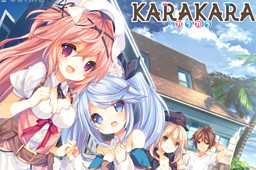 カラカラ
Brand(s): Sekai Project , calme , DenpaSoft
Release date: 2016-06-27
Karakara is the debut title by calme. The game will be released in both English and Japanese. “Let us live on this land so arid.” KARAKARA. It is the sound of aridity. It is the sound of dry asphalt and… Read all
View full details