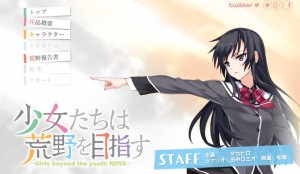 It’s only been a week since the website for Minato Soft’s latest game “Shoujo-tachi wa Kouya wo Mezasu” was opened, and now they revealed the cast names for the main cast. Which means we get to see 6 names, the same amount as the current amount of characters listed at their website.

Oh, and don’t forget that this is an all-ages game, so don’t be surprised at some of the names. Here they are:

The earlier released voice samples are now also available at each character’s own page, so check those out if want to connect a voice with the right character.

Buntarou doesn’t know what he wants to do in the future, he does not have any kind of dream that he wants to pursue. So currently he just spends his days hanging around with his friends. When one day his classmate Sayuki asks him if he wants to help with development of a gal game. She says that she had become interested in his help after she read one his works intended for the drama club.

Buntarou doesn’t know anything about gal games but Sayuki claims that she has the ability to make it a success. Can they make the game and will it be a success like she claims it will be? This is the story of youths taking a daring step into the unknown… 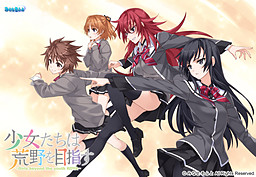 少女たちは荒野を目指す
Brand(s): Minato Soft
Release date: 2016-03-25
Shoujo-tachi wa Kouya wo Mezasu is a new all-ages game by Minato Soft from the same combo of writer and artist that brought you Cross Channel. Buntarou doesn’t know what he wants to do in the future, he does not have… Read all
View full details