November, the month where the days maybe start to get cold (depending on where you live of course). And for us visual novel fans that means it’s the perfect time to stock up on some games to get us through these days. Well, you’re in luck! Last week featured plenty of new English releases that can keep you busy for a while.

On the Japanese side we’ve just had the October releases and not a lot of companies have updated us on their upcoming games. There’s still a new company that appeared however, and we’ve also had some patches for some of the earlier releases.

Last week meant great news for fans of visual novels from VisualArts/Key. As Little Busters received its official English Edition release on Steam. Little Busters is probably one of the most well-known visual novels by the company, arguably of the entire genre as a whole. Especially for fans who’s been reading Japanese and/or fan-translated visual novels for a while.

The Little Busters English edition expands onto the “Perfect edition” of the game that now supports HD resolution as well.

Vifth Floor, a developer you might remember from the release of “Just Deserts”  in 2016, has now released their second title “Void“. A visual novel themed around espionage and revenge. 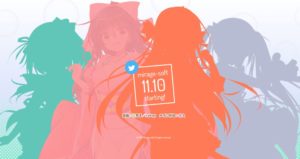 A new company called Mirage-Soft published a teaser page for their debut game. Which will feature art by Lucie and Kakao.